Just in case anyone wondered…

…THIS is my hero- The one and only Jenny Lewis. 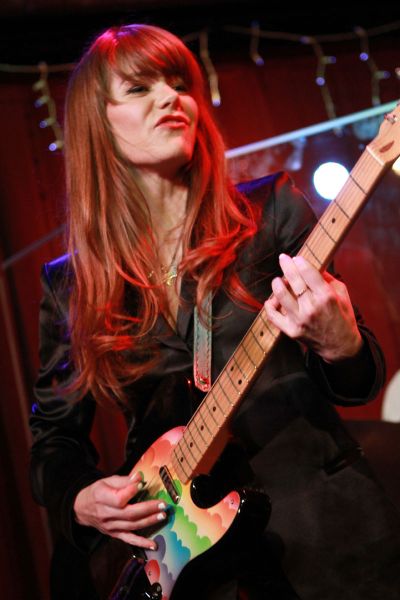 I was fortunate enough to get to see her on her Voyager tour (note the rainbow detail) toward the end of 2014- I caught her at Terminal 5 in NYC and at the Calvin Theater in Northampton, MA in the same week because you’re not going to NOT see Jenny Lewis twice in a row if you can possibly do so, amirite?  Of course right.

I seriously love the rainbow suit and matching rainbow guitar.

Anyway, I’ve been a serious fan of hers ever since a dear friend of mine introduced me to her music (specifically the Rilo Kiley album: Execution of All Things) back in 2002, well before she had embarked on her solo career, while she was still the front woman for the band Rilo Kiley.  I’m proud to say that I caught a couple RK shows, too, before the band.. well, disbanded.  Her work simply spoke to me and resonated with me in ways that no one else’s had except for perhaps my OTHER teenage obsession- Cat Stevens.

If you have never heard of her, I strongly recommend checking out her music.  Her voice is amazingly expressive and hauntingly beautiful, her lyrics are brilliant, poetic and thought provoking, and often very stark.  Unlike many other musicians who prefer to focus on all things lovely and idyllic, and while still not centering solely on heartbreak, she sings about the dark realities of life and love in a truly relatable manner.

Personally, as a singer/guitarist, I am greatly influenced by her music and I truly love to cover her work in my own solo acoustic fashion.  Just ask any of my open mic friends, they’ll tell you!  Her vocal range and my own seem to fall across very much the same spectrum, so I feel that as a cover artist, I can do her songs about as much justice as anyone who isn’t Jenny possibly could.
I still struggle to write my own original songs (well, I write them but I always feel that they are trite and unworthy of an audience.. yet) but she inspires me to keep trying.

Clearly she’s not having any fun at all.

Lately, she has had tremendous success with her newest album The Voyager.  I will tell you now it is well worth a listen.  My favorite Voyager tracks are.. almost all of them, really.. but specifically “Slippery Slopes,” “She’s Not Me,” “Can’t Outrun ‘Em” and the title track, “Voyager.”
Here is a review of the album that I feel sums it up really well- better than I could, if you are interested in reading about it.  My advice is to simply give it a listen.  You’ll be hooked.

I will sign off here for tonight but I think tomorrow I will select a video or two of hers and post it here for your viewing & listening pleasure.  Additionally, she’ll be continuing her Voyager tour this spring and summer so if you decide that you love what you see and hear, she will more than likely be playing somewhere nearby to you!

This entry was posted in influences and tagged Jenny Lewis, Rilo Kiley. Bookmark the permalink.