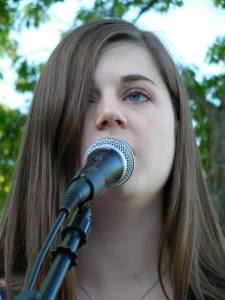 Since age five, when Merrill was first asked to sing “Rainbow Connection” solo at her kindergarten graduation, she has been sure that she loves music and the stage.

From roughly age seven through high school and college, Merrill has always been involved in school choruses, church choirs and even hand bell choirs.  She has performed in numerous musical productions as well as various local summer concerts – such as those put on by the East Longmeadow, MA Rotary Club and having joined her father, Brad Shepard, on stage at the Majestic Theater in West Springfield, MA.

“My dad frequently had Broadway musical soundtracks playing around the house and in the car when I was little, so I ended up basically memorizing them all, which had me singing really passionately from a pretty young age.

When I was a little older, around 14 or 15, I started listening to a ton of Cat Stevens and Simon & Garfunkel which sparked my interest in acoustic guitar.  My parents got me a bright red, Washburn acoustic for my birthday and ‘Where do the Children Play?’ became the first thing I learned how to play.  I would take it outside where I could be mostly alone and try to tinker with different chords, just exploring.  I had also found a little spiral-bound book of camp/folk songs, complete with guitar chords to pore through.  Shortly thereafter came my discovery of websites like UltimateGuitar where I could look up a chord sheet to just about anything I wanted.  That was like Christmas.

A little after that, when a friend handed me my first burned copy of Rilo Kiley‘s ‘Execution of all Things,’ I got my first taste of Jenny Lewis.  I found myself both totally hooked on and in complete awe of her talent, and from there became interested in song writing and entertained a few different band projects which centered around original works thereafter.  Discovering ‘Eisley‘ around then helped to fan that flame, too.  None of those projects ever went very far but they are where all those little notebooks scrawled with passing thoughts and bad, overwrought lyrics were first born!”

Along the way, Merrill has honed skills with both acoustic guitar and piano and has been working to further her proficiency as a solo acoustic performer.
She regularly plays out at a variety of venues and participates in the occasional songwriters’ showcase – solo, most recently, with the Western Mass Songwriters’ Collaborative, and looks forward to an upcoming performance as a trio in March 2018 with the Valley Music Showcase.  She has also performed with her trio in an installment of the Valley Advocate Sessions: The Merrill Shepard Show.

Be sure to check her event calendar regularly for more performance dates!